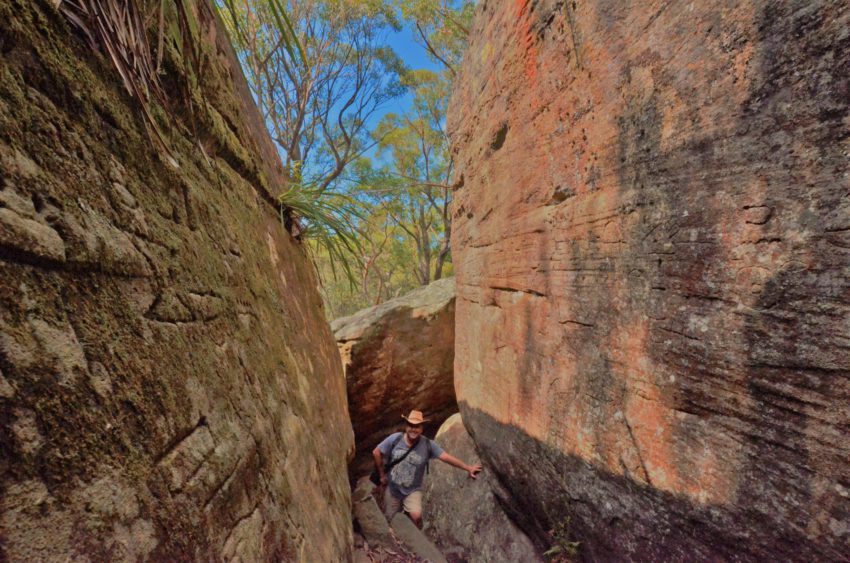 A shorter version of this article is also published on The Weekender Travel website.

We amble to what is commonly called the Gosford Glyphs; along a walking track to secret treasures, it feels. There is a current debate about the Glyphs – are these Egyptian hieroglyphs authentic? One group of academics consider the 4,500-year-old Egyptian glyphs legitimate, and that they have evolved over time as languages do. It is said that the text can be translated to even identify the ancient scribe’s name and occupation.

The opposing party disputes the authenticity of engravings, claiming that the stone carvings were inscribed in the 1920s; possibly by an English soldier. We set out on this journey not to take a particular side but to experience and view the intriguing symbols engraved on these remote sandstone walls.

The shaded trail is the coolest part of the forest. We stroll past a variety of eucalypts, trekking alongside a sandstone escarpment engulfed by dense vegetation. With an abundance of birdlife, we try to capture the prime photographic shot, but to no avail. We are able to spot the beautiful red-and-blue Crimson Rosella before it disappears happily into the forest canopy.

Ian had been given a broad-brimmed sun hat, with both of us in taking a move away from the sexy sun caps – I tell myself we are both like the Bush Tucker Man incarnate – a double act. And as we saunter I’m surprised to see another young couple on this quiet track, also with large brimmed hats, I yell out an enthusiastic “hi there!” as if I’ve known them all my life, feeling proud to be a part of the broad-brimmed hat team! 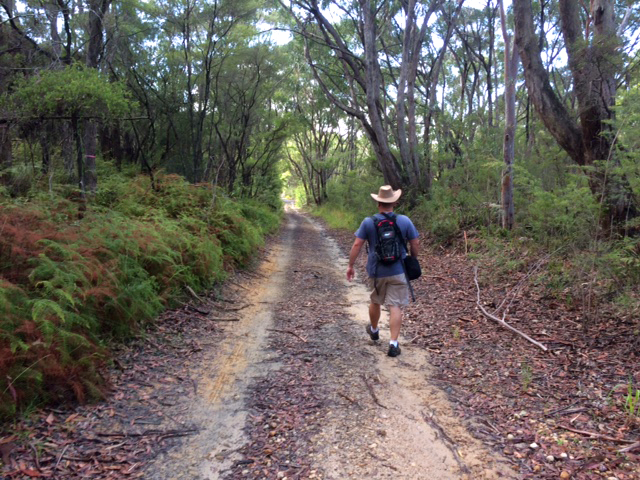 We soon approach the Grandmother Tree, another significant feature on this trail. Renowned for its age, the tree is said to be 1,000 years old. Its massive twisted roots have enveloped a large sandstone slab. The positioning and height of this divine tree stands as if guarding a magical forest and it somehow warmly entices you to embrace her majesty.

Leaving the magnificent tree behind, we traverse the scrubland and wildflowers to begin our scramble into lichen-covered rocky crevices. Clambering between large rock boulders, we follow an indistinct rocky dirt path that twists and turns. Then we find a narrow corridor and glance upwards to discover we are surrounded by the spellbinding symbols, beautifully engraved into sandstone. The atmosphere is other-worldly. It took a two-minute scramble to access them in a hidden sandstone corridor, and observing the beauty of these stone etchings, we are spellbound! 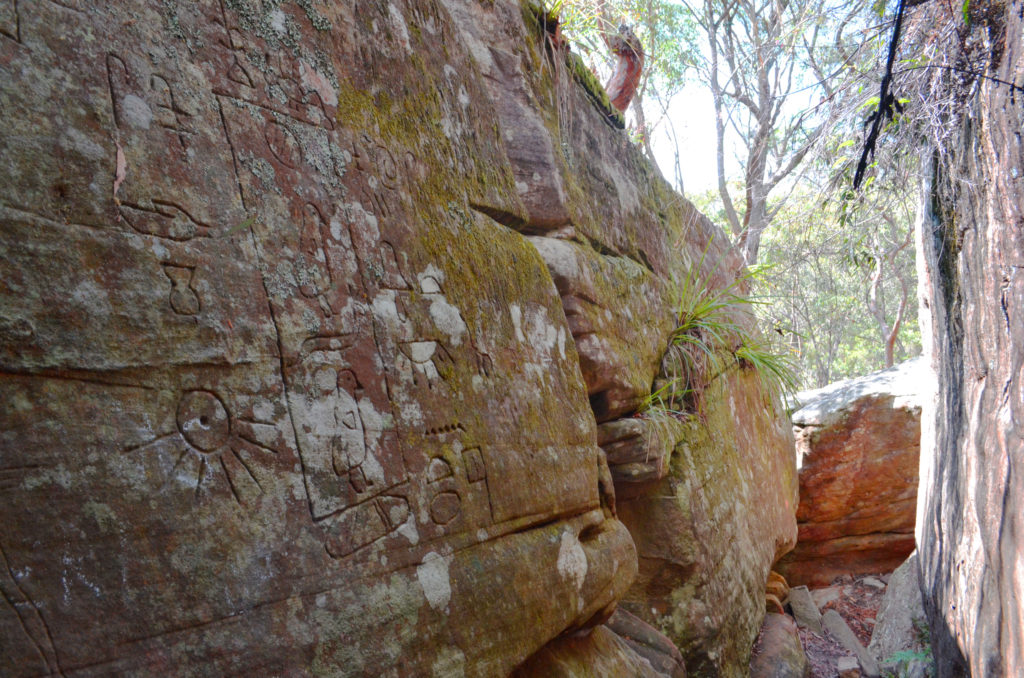 A couple of weeks before our walk, we watched an interview (on the Tony Robinson Walking Through History documentary), with Jake Cassar, environmentalist, who spent time with Aboriginal elders in this area. He is adamant that the Egyptian hieroglyphs are authentic. Jake describes how particular symbols are enclosed by a rectangle telling the story of two Egyptian princes who journeyed across the waters by boat, until they were shipwrecked on Australia’s Central Coast shore. While one of the boys was killed by a snake bite, the other was left to be raised by a local Aboriginal tribe. The boys are depicted by the birds, and a snake is carved in between them. 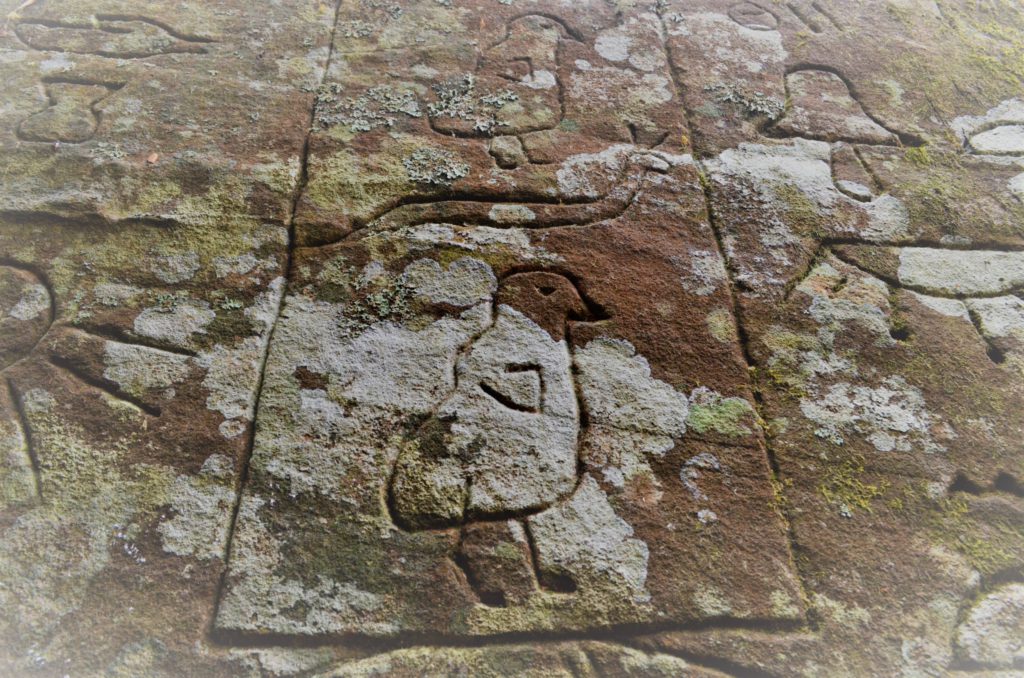 There is evidence of other rock engravings in this area that are acknowledged and authentic. The Bulgandry Art Site Aboriginal Place is further up the road from the entrance to this track, where rock art from the Guringai people is displayed for public viewing. The engravings are said to be more than 200 years old, some perhaps ten times that age.

Both sites are sacred to the local indigenous tribes. While the story of the Egyptian princes’ arrival in Australia is far from certain, the connection that one of the princes had to Aboriginal peoples as was told in this emphasises our deep and long indigenous history and culture. And whatever the true account, the Gosford Glyphs and surrounding area certainly feel sacred and are a very special place. 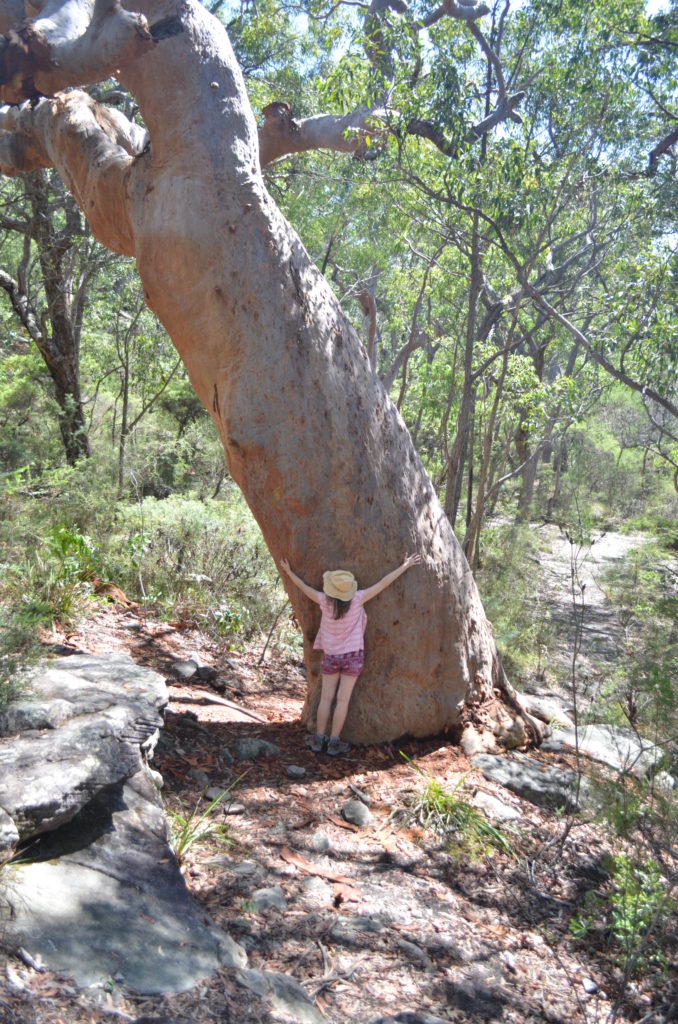 Shelley has published a variety of online articles. With a master’s in special education, this has allowed her to write in the area of education, through platforms such as The Huffington Post. Being an outdoor enthusiast, she has written for The Weekender Travel and currently writes for Kombi Lifestyle. She is keen to share her knowledge and enjoys writing informative articles that help the discerning traveller prepare for road trip holidays in Australia. Shelley is the founder of Kombi Lifestyle.