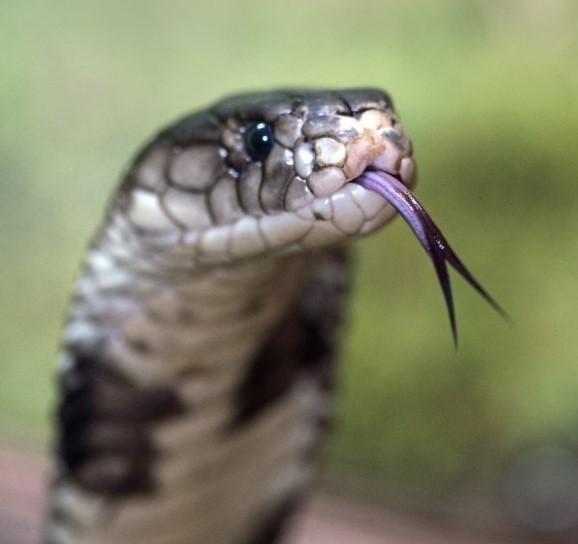 We are browsing through a plethora of online guides, deciding on what trail would be a fun short day trek. And reach a conclusion that to explore the Mooney Mooney Nature Walk – with its suspension bridge and variety of landscapes, and an abundance of flora and fauna – would be perfect for a hiking adventure! But we learn and get more than what we bargained for on this trek. This is our hiking, snake encounter tale, a true account.

My husband thought my teenage nephew would love this walk, especially with its diversity of trails traversing grassy woodlands, rainforest, a creek with stepping stones and a bridge. And I knew my sister as a yoga teacher, would like this walk too, for its calmness and serenity of the bushland, from what we had read about it anyway.

With our backpacks thrown into the boot of the car, and not a cloud in the sky, a luminous sun creates a lovely summer’s day. We eagerly set off on this journey with my sister and her teenage son.

In Australia, there is a variety of flora and fauna, and often most sought after by walkers – just to catch a glimpse of these animals in their natural habitats are; kangaroos, koalas, echidnas, dingoes, platypus, wombats and wallabies. The most common sightings are usually kangaroos or wallabies. Then there are the bushland’s venomous animals. There are more venomous snakes here than in any other country.  However, snake bites are rare and usually occur when this reptile is provoked by humans.

My father would advise upon the approach of a snake, “around shrubs and dirt tracks, clap or stamp your feet to scare them off.” I have fond memories of my childhood and our bushwalking trips to the Blue Mountains, my English father dressed in light layers of clothing to protect his easily burnt skin from the sun, teaching me not only about the animals but plant life too. My favourite – the Scribbly Gum tree, where the borrowing larvae from the Scribbly Gum Moths leave distinct patterns on the tree. 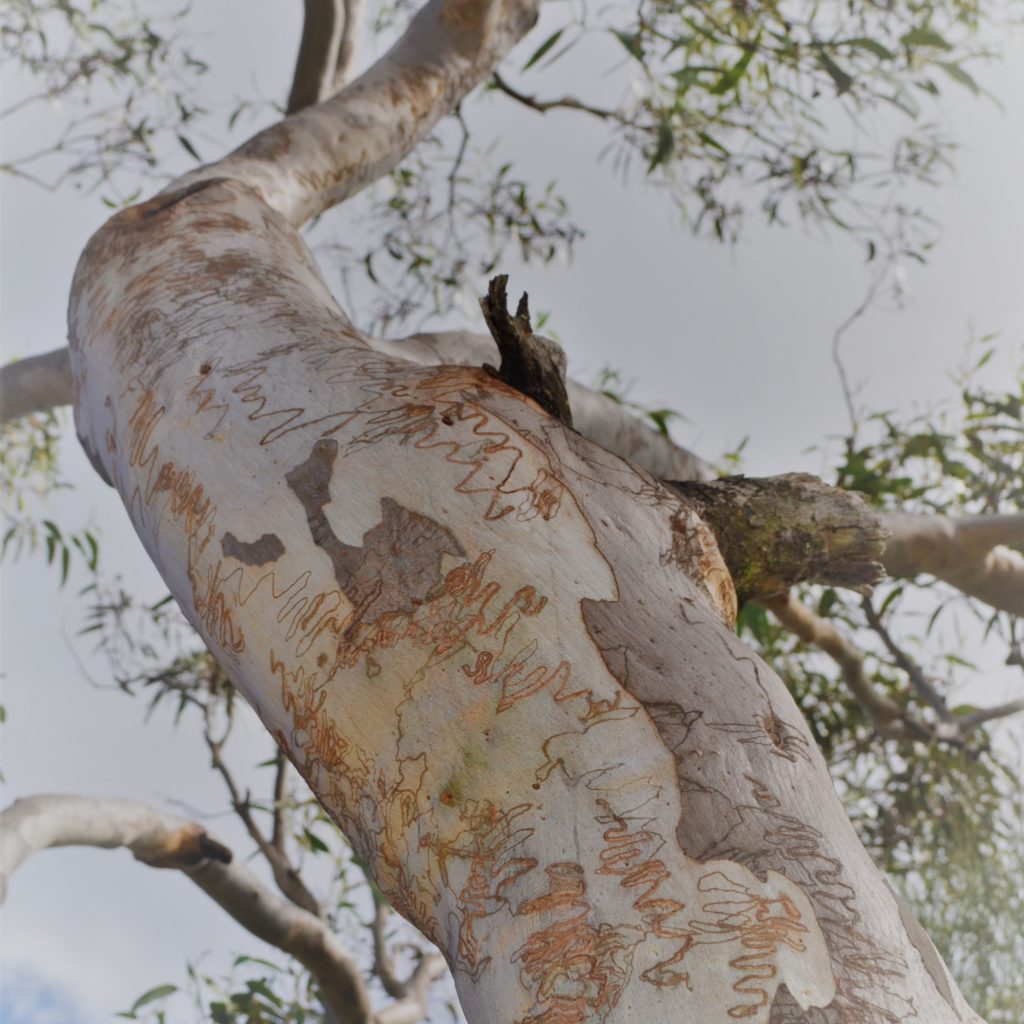 My Spanish mother wearing fewer layers, would not have a care in the world. She would make the most lavish picnic lunches, and her sense of humour would make our experiences such fun.

I have seen two snakes in my life, slither away from afar and I was not scared, but it was while my father would be clapping and stomping his feet. And I’d also be amused. My husband says if you see a snake “standstill.” What would I actually do face-to-face with a snake? I’m sure I would at least be calm and brave.

Established in 1959, today Brisbane Water National Park spans 11,506 hectares.  It is home to a number of endangered plant and animal species, Aboriginal engraving art sites and a variety of trails. Brisbane Water, one of the main bodies of water in the park, is named in honour of Sir Thomas Brisbane, a Governor of New South Wales between 1920 – 1925.

We arrive at the car park and pay a small fee, perhaps going towards helping in the preservation of this magnificent park.  We are surrounded by a variety of eucalyptus trees and dense bushland. At the end of the car park begins the trek’s picturesque walk. Situated in an elevated position, a lookout encapsulate views of rocky platforms, where you can hear the sound of cascading water, which entices you to venture further along the descending steps to get up close and personal with nature.

I’m standing on a large rocky ledge, which I feel could resemble the craters on the moon. I’m listening to trickling streams while observing the waterfall with its variety of birdlife, stepping stones provide a Blue Wren with a place for a quick rest and a drink, as it flits about. This marks the beginning of the path into what seems a calming and relaxing bushland trail.

In this national park as with many that surround it, one of its significant features is the Hawkesbury sandstone (aka Sydney sandstone), named after the Hawkesbury River north of Sydney. And on many trails such as this one, the sandstone rock often captures our attention. We cross the stepping stones to begin our amble through land punctured by rocky outcrops and eucalypt trees, we marvel at the interesting rock formations along this track.

As we traverse a wooden bridge, I glance above at the forest canopy and at the creek below. I’m admiring through the speckled sunlight the technicolour that surrounds. The autumn red leaves that are falling and somersaulting to the ground – have put me into a trance. Until I hear a scuffling noise, I see my nephew who is behind us battling with a leech! Our first encounter with the little critters on this trail! 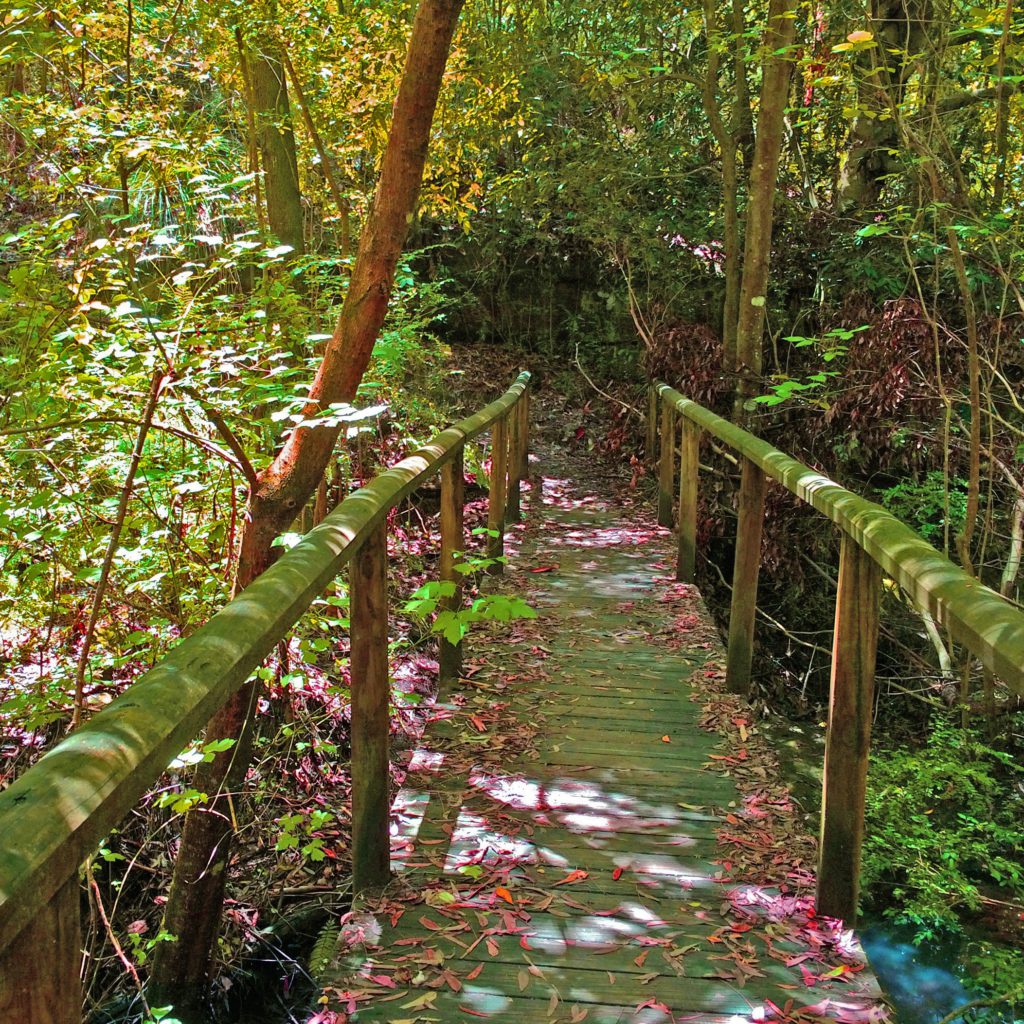 My husband turns around to see the wiggling leech pierced between my nephew’s fingers and praises him on his skill in being able to catch them. Not realizing that the leech had made an attack, and was prised off his leg rather than as a matter of choice to catch it from the bushland and investigate it. With a frantic extraction – the leech is catapulted safely into a faraway land. Laughing, my nephew reassures my husband that he won’t be going out of his way to catch them.

We each found a leech attached and wiggling on our skin and drawing blood. It’s a ghastly sight to see a (sometimes giant) black worm attached to skin, and once it’s off it leaves a dripping trail of blood on its victim. Even with hiking boots – akin to armour, they are still able to penetrate.  They seem to magically land on humans from somewhere, it’s actually a mystery to me how they suddenly appear on our skin.

I remember as we walk, that it’s advised to not pull off the leech, as they don’t detach easily, but I guess these were small enough to flick off. Or we were just lucky. And applying salt is another remedy that allows these critters to fall off easily, which I make a mental note to myself to pack next time.

We finally arrive at the fun suspension bridge and scamper up and down it as it wobbles in the air, taking in the views. The Phil Houghton Bridge is a metal suspension bridge that crosses Piles Creek and it is part of the Great North Walk. It replaces an older bridge that is part visible upstream. We are enjoying our elevated position overlooking the river and gum tree laden-valley from this moving bridge, and we spot an oasis in the bushland. This beach-like oasis seems like a perfect place to stop and recharge our energy. 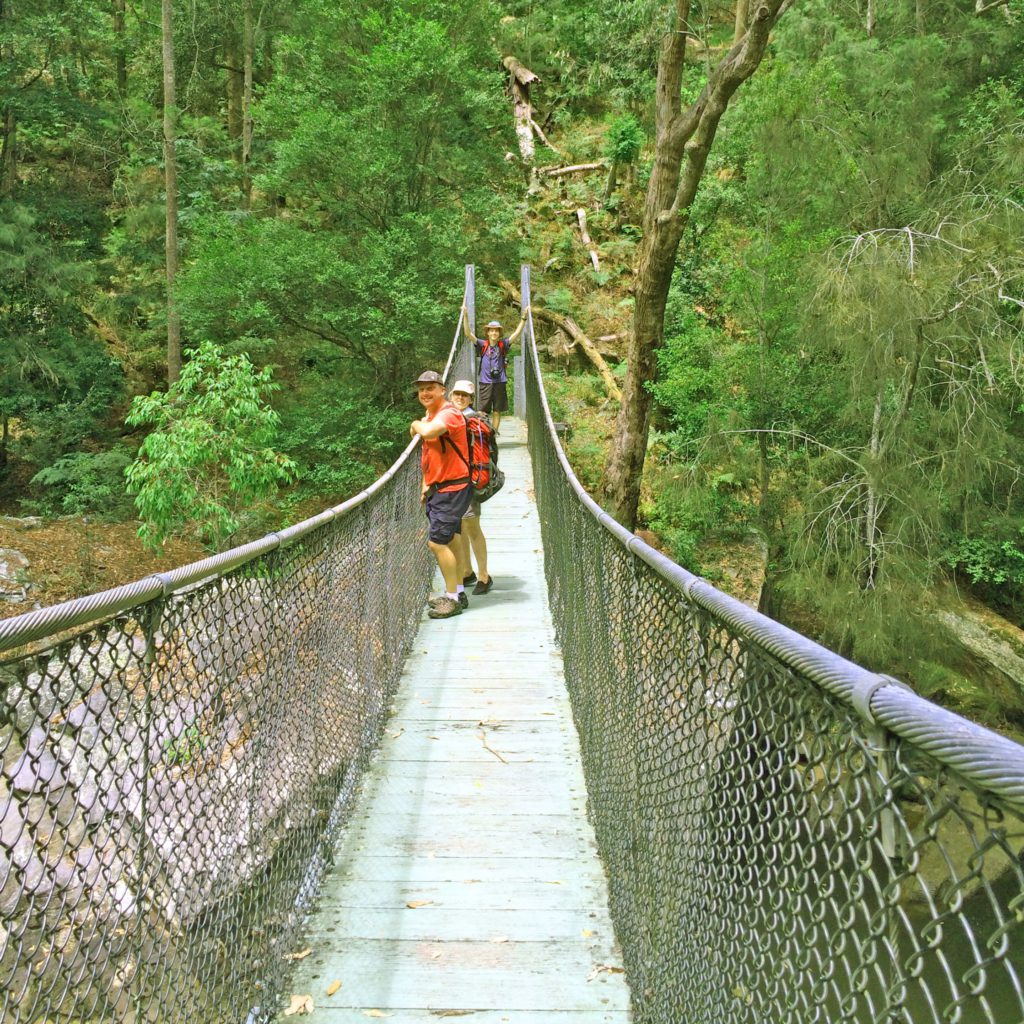 I eagerly lay out on my nifty travel towel – on a small patch of sand along the river, until I spot three more leeches. Then I notice a leech is on the border of my sock and skin, I flick it so quickly, that my reflexes surprise me, I don’t like to harm animals. But somehow my body is in sync with my mind and they both work at lightning speed, and I’m not really sure if it was a leech.

I’m perplexed to see my sister take a leisurely swim in what I feel could be leech-infested waters, but apart from that, this is a lovely spot for a rest and a cool down. She coaxes us with a hand wave to come in, and I nonchalantly indicate I’m happy to picnic on a rock and eat Mum’s scrumptious potato salad that she made for all of us, and I secretly keep watch and ponder the habitats of leeches. Do leeches swim or live in the water? Not sure, I was just happy to move on from here.

We scramble out from the river’s edge over some large slippery boulders and sandy ground, trying to find a stable or dry area to place our hands and feet. We soon find the trail leading into a dark eerie rainforest, and stroll past intriguing moss-covered logs. Most of the walk up until this point has been on relatively flat dirt pathways. We begin the ascent on this last leg of the trek. 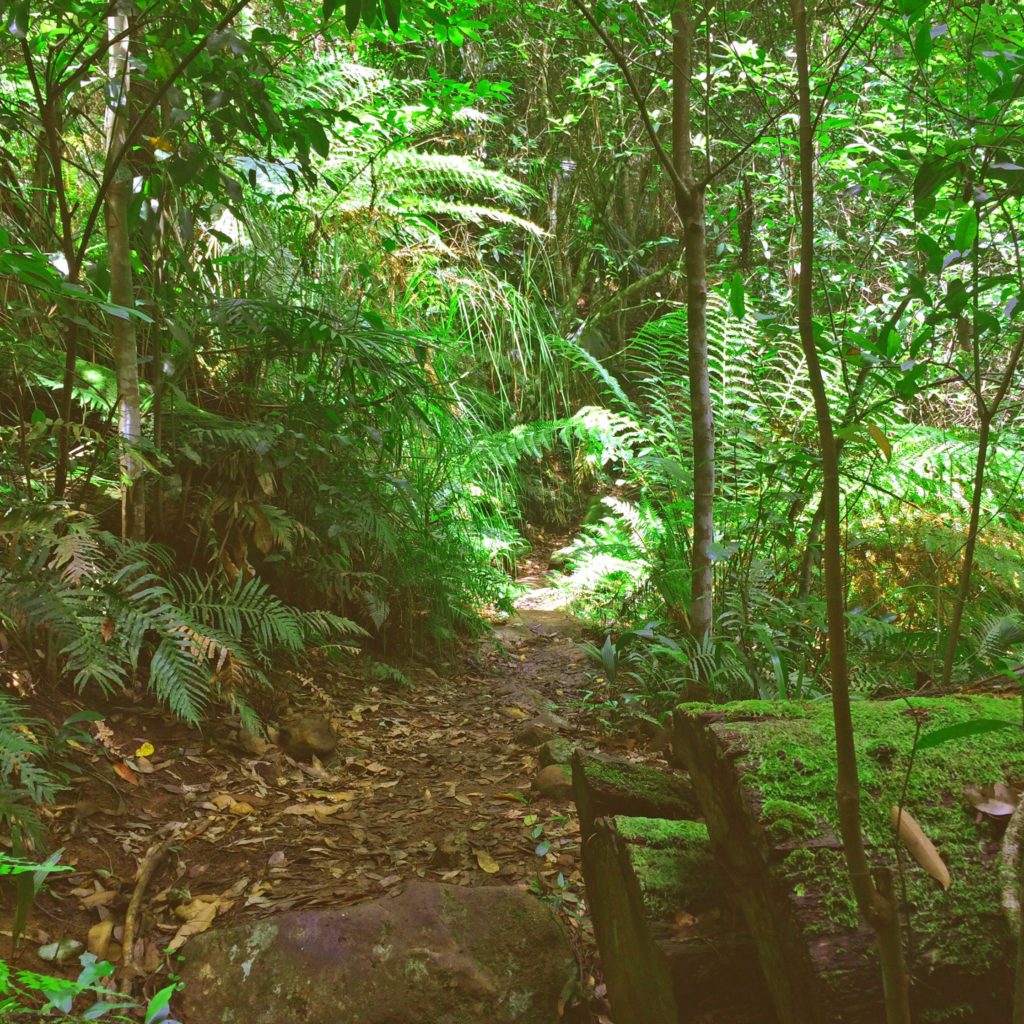 Knackered, and close to the finish, we are walking in single file, myself at the end and drifting off into a slower pace – until I hear my sister yelling and shrieking! I can’t hear what she is yelling, but by the third scream it didn’t matter, she is running from some predator and we all run downhill!

I feel my husband push me to run faster, and I mumble to him “what is it?” And he blurts back, “don’t know, just run!” We are running but I’m not sure what from. As I’m running I turn around, and see we are being chased by a snake, and I realized my sister screamed “brown snake!” We become marathon runners! The snake is poised upright like a cobra, and moving very fast after us! I turn around again and look back up the path desperately hoping to not meet its eye gaze again or see that it has become closer.

Through everybody’s legs – I see it is still following our trail, then somehow my sister and nephew overtake us going downhill on the path, and my husband and I have strangely been chased into scrubland heading towards the edge of a small escarpment.  With no room to run we come to a sudden halt, the snake approaches us in a zigzag manoeuvre, however, it’s head is turned away from us. We are shaking, adrenaline pumping, standing on the edge of the cliff! I could almost touch the snake it’s that close, but I’m frozen and I don’t think I’m breathing. Our eyes wide open, I watch it veer around us, and disappear over the cliff. It is gone!

So much for being calm and brave! I wonder if standing still or clapping would have worked prior to the chase?

Totally exhausted, we head home. On the way home in the car, there is intermittent silence in between talking about the incident, laughing about it, and questioning it. What just happened? What sort of snake do you think it was? Why did it chase us? Who saw it first? We laugh about it. There is silence. Then we question it some more.

Once home, my nephew was eager to identify the snake: it was an Eastern Tiger Snake. Later we found upon an incidental meeting with renowned snake handler Neville Burns; that a snake’s eye-sight is not as acute as ours, and this particular one – when startled will quickly take the easier option of a downhill path, and we just happened to be in its way!

Snake bites are rare, and our face-to-face snake encounter was evidence of that. Had we perhaps been viewing the forest canopy searching for koalas, which I had read about after our trek (koalas often make the occasional appearance in this area), we may have been so distracted that we wouldn’t have noticed it. Nor would we have frightened it.

A realization that we share this magnificent wild bushland – a renewed awareness as respect for the habitats and living things within it.

Shelley has published a variety of online articles. With a master’s in special education, this has allowed her to write in the area of education, through platforms such as The Huffington Post. Being an outdoor enthusiast, she has written for The Weekender Travel and currently writes for Kombi Lifestyle. She is keen to share her knowledge and enjoys writing informative articles that help the discerning traveller prepare for road trip holidays in Australia. Shelley is the founder of Kombi Lifestyle.